The network path visualization shows the path(s) of network traffic between a Kadiska Station and a target (defined in the Net-Tracer configuration).

The path discovery process is explained here. The target can be a domain name or an IP address. In the current release, Kadiska supports IPv4 addresses only. Each node in the graph identifies a router. The color corresponds to a specific ISP/AS (Internet Service Provider / Auntonomous System) so that you can easily distinguish the different operators that are traversed. 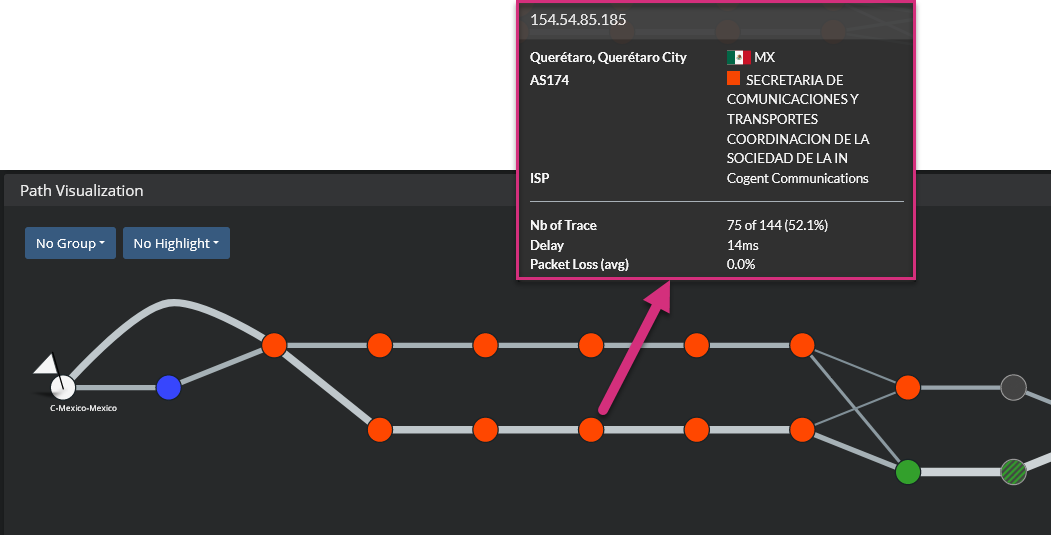 Mouseover any of the nodes to get more information:

In addition to these data about the router itself, Kadiska provides the following metrics:

As explained here, the routers do not always respond to Net-Tracer test traffic sent by the Kadiska Station. In this case, Kadiska can still identify the router but cannot provide any related data. In the network path visualization, these routers are identified by greyed nodes.

As highlighted in the picture above, any unknown node between two different ASs is simply greyed out. In case the downstream and upstream routers reside in the same AS, the unknown router is greyed but keep the color of the identified ISP (node is colored with stripped lines).

When the target does not respond to any Net-Tracer test traffic (click here for more details), the link between the last identified router(s) and the target are symbolized by stripped lines. 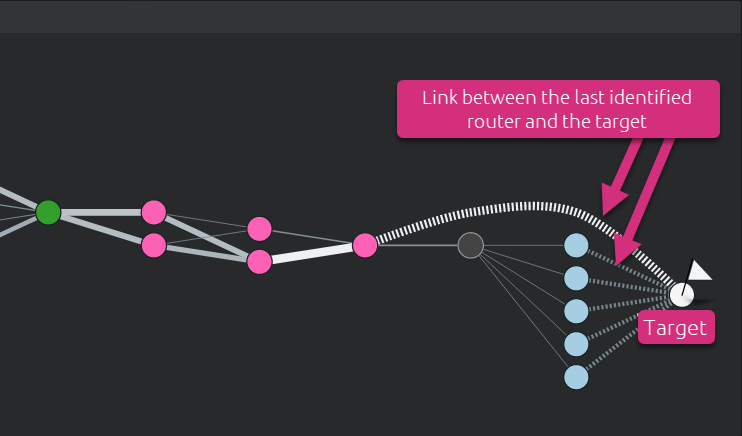 In such a case, the end-to-end RTT value as well as total packet loss can only be measured up to the furthest discovered router. This is where choosing another method or combining different methods can solve this problem. The screenshot hereunder shows a path that combines different methods. One of them reaches the target.

So, as you can see, using different Net-Tracers methods for the same target combine all measurements into one converged network path. If you want to visualize data that correspond to a specific method, you can use the global filter: 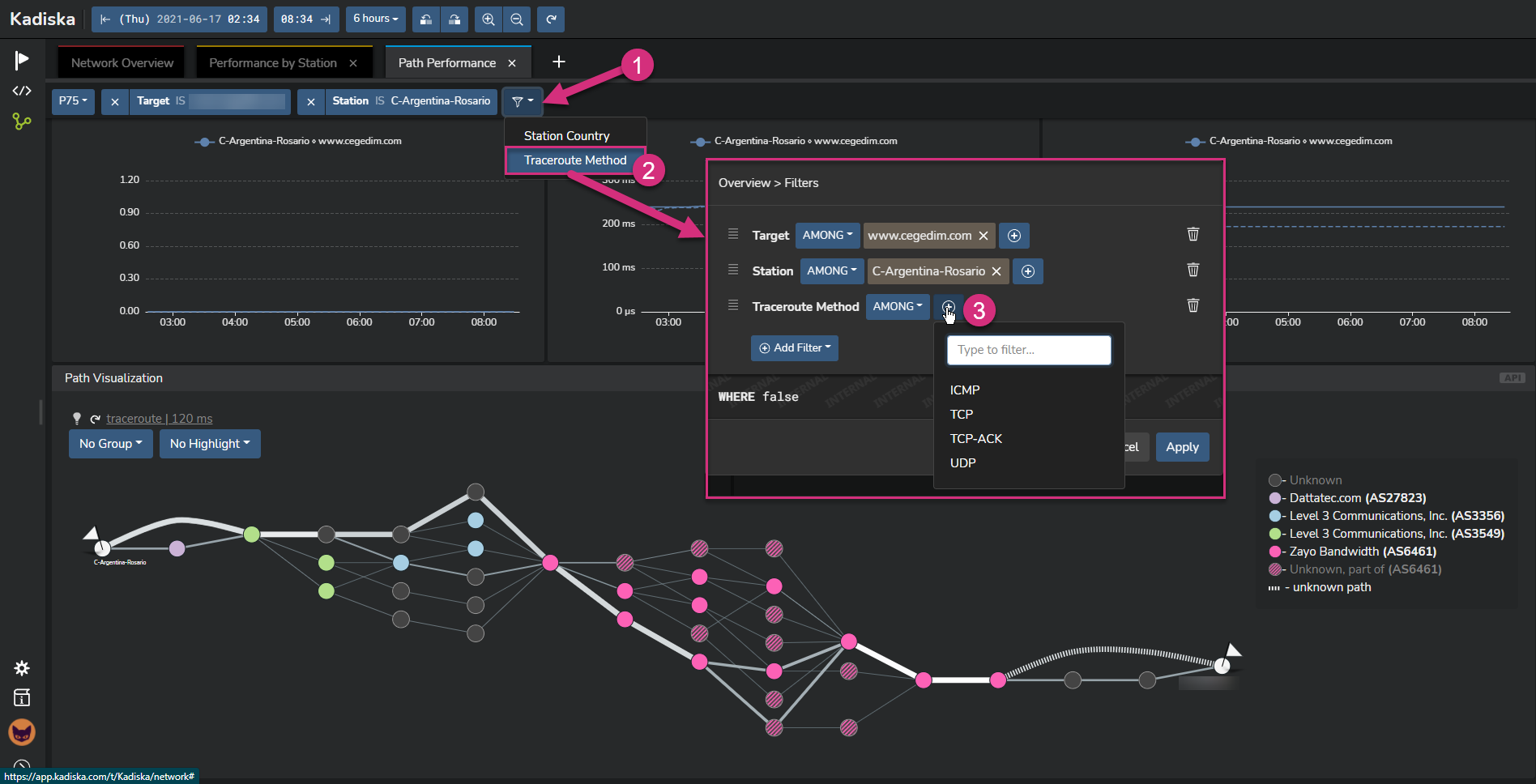 In all timeseries widgets, metrics related to partial path discovery are identified by stripped lines. Plain lines are used when the full path to the Net-Tracer target is successfully identified.

If you want to identify links that experience packet loss, go to the second menu at the top left corner and select the option "Loss". The links with high packet loss value are highlighted in red (the higher the packet loss value, the deeper the red).

A good way to detect any period of high packet loss and see the link(s) that suffered from this degradation consists of looking for peaks of values in the "Loss over Time" graph. Select the period of degradation by clicking and dragging in the graph itself. The network path visualization automatically:

The principles are the same as for packet loss. First, go to the second menu at the top left corner and select the option "Delay" to highlight link(s) that suffer(s) from high network latency.

You can also select any peak in the "Round Trip over Time" graph to quickly identify the link(s) that experience(s) high latency.

The last path shows the network path taken during the last Net-Tracer test in the selected timeframe. Go to the second menu at the top left corner and select "Last path". The last path is then automatically highlighted.

In some cases, depending on the chosen timeframe as well as network path complexity (multiple paths to distinct ASs, load balancing, routes changes over time, ...), it may be difficult to get a clear view of the different network paths and related performances. As explained previously, focusing on a precise timeframe from the graphs can highlight specific paths. But if you want to keep the whole timeframe, there are two additional ways to simplify the network path visualization. Let's take the following simple example and look how it is possible to focus on some relevant information.

When the network path visualization becomes complex, you may be only interested in knowing which ASs are being traversed. In which proportion and with which level of performance? To answer these questions, you can group the nodes by AS. For this, go to the first menu at the top left corner and select the option "Group By AS".

This view can be combined with the options from the second menu (packet loss, latency and last path) to highlight specific points of interest. Mouseover any of the AS nodes to see details about its internal routers.

If you do not want to group nodes by AS and still want to simplify the path, you can focus on the most used paths. You can do that by removing paths that are used less than either 10% or 25% of the times. Go to the first menu at the top left corner and select the option "Threshold 10%" or "Threshold 25%" depending on your needs.

The different nodes that correspond to the least used routes are grouped together. Mouseover any of the groups to see the same information as for the grouping by AS. 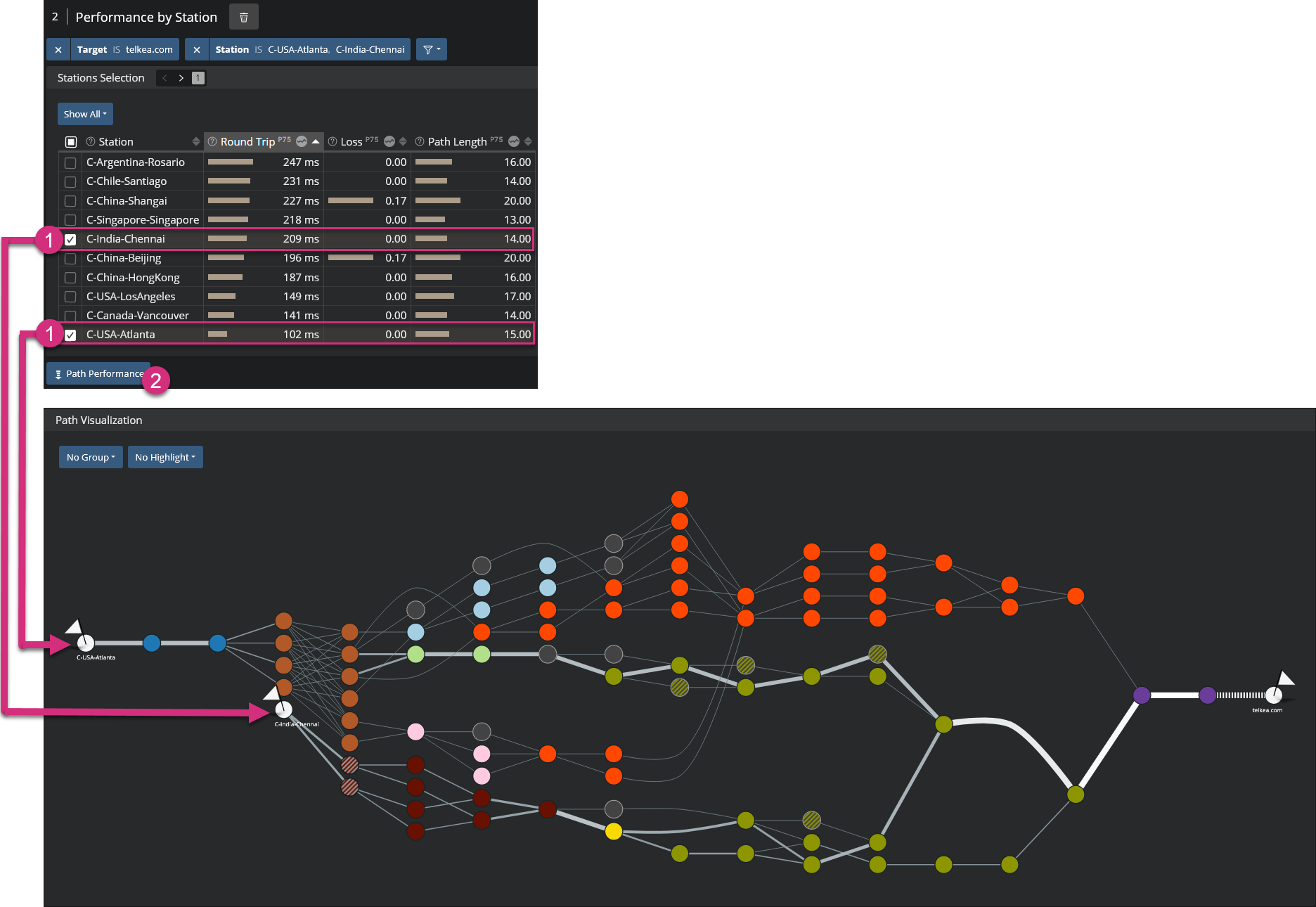