In networking, RTT generally refers to the time needed for a packet to go from one end to another end, and back. Please refer to our article "What is network latency? How it works and how to reduce it" for more details.

In the Kadiska platform, the RTT value is provided at two different levels:

In the context of Kadiska Net-Tracer, RTT for end-to-end communications is the time elapsed between the following events:

Important remark: Depending on the Net-Tracer method used, the target may be reached or not. If the target is not reached, the RTT value takes the furthest discovered router into account. This is why Kadiska specifies "Furthest" for this kind of metric.

In order to compute the RTT for end-to-end communications, Kadiska takes all Net-Tracer tests as well as all possible paths into account and calculates the average value: RTT = (∑RTT Net-Tracer tests) / #tests

In the Kadiska platform, this end-to-end RTT value is provided in different sections. First, in the "Network Overview" section, RTT is provided by Net-Tracer target. If you do not use any filter, this RTT value for a Net-Tracer target corresponds to a P75 (75th percentile) distribution of all RTT values for all Kadiska Stations probing this target.

The map represents the RTT value grouped by Kadiska Stations and countries. Again, the RTT values correspond to a P75 distribution. 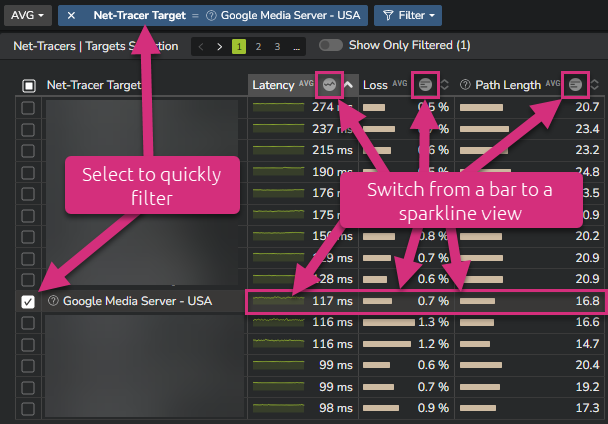 Moving to the "Performance by Station" next section keeps the filter you previously defined. This view provides the RTT value per Kadiska Station. The following example shows the top 10 highest RTT values per Kadiska Station that targets our website (www.kadiska.com).

Finally, the end-to-end RTT value is provided in the "Path Performance" section as a timeseries graph:

In the context of Kadiska Net-Tracer, RTT for intermediate nodes is the time elapsed between the following events:

In the Kadiska interface, this value is provided when you mouseover any node in a path visualization: